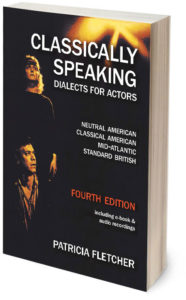 “Patricia Fletcher has done a tremendous service for all of us who are interested in language and classical text. THIS IS A MUST HAVE BOOK.”
William Esper
William Esper Acting Studio

CLASSICALLY SPEAKING offers an approach for actors who wish to explore sound beyond their habitual speech, fine-tune their ability to hear and identify subtle variations in sounds and dialects, and to develop the flexibility and skills necessary to adjust their speech to the particular demands of a wider range of characters and material.

THIRD & FOURTH EDITION DIGITAL AUDIO DOWNLOAD
These audio files are subject to United States and international copyright laws. Accordingly, it is illegal to transmit these files to anyone else, by any means, electronic, mechanical, recording, or otherwise, without written permission from the copyright holder, Patricia Fletcher.

Read some sample chapters from Classically Speaking below and listen to some sample audio:

More About the Book

Neutral American Speech (NAS) (237 pages) is the most practical dialect an actor can study. Sometimes referred to as General American, it is spoken without regionalisms that identify an actor’s specific point of origin or ‘home’ sounds. When effectively incorporated, the actor – and therefore the character – is not revealed as explicitly Southern, Mid-Western, or from Boston, New York, Chicago, Tennessee, New Hampshire, Texas, etc. He/she is therefore ‘neutral’.

Mid-Atlantic dialect (18 pages), which often sounds like Standard British to the untrained ear, is covered in brief, as is its relationship to Classical American and Standard British.

Standard British (RP) (63 pages), the dialect traditionally spoken by the English upper and upper-middle classes, is appropriate for characters in period plays, those of the 19th century authored by Shaw and Wilde, or Restoration playwrights Congreve and Farquhar, among others.

Note: It is also beneficial for American actors to know Standard British as a foundation on which to build their study of foreign accents. Speakers of Standard British have taught English as a second language to many people worldwide, and this is reflected in these people’s spoken English sounds.

“Patricia Fletcher’s book Classically Speaking is a compendium of everything there is to know about how words are formed when speaking Neutral American, Classical American and Standard British, both using IPA and in detailed description of lip, tongue and jaw positioning. She explains figures of speech, rhythms of speech and speech inflections and offers hundreds of practice texts from one-liners to tongue twisters to poems and speeches. The serious student will find everything here to expand and enrich his or her awareness of and expertise in speech, dialects and text interpretation. Ms. Fletcher is a brilliant and sensitive teacher – her knowledge is faithfully represented in these pages.”
Kristin Linklater,
Founder, Linklater Voice

“Whether you are an actor, voice teacher, or director, Classically Speaking by Patricia Fletcher is A TERRIFIC AND COMPREHENSIVE WORKBOOK for language and articulation. This book is an invaluable and well-organized guide in deciding which choices to make to enhance and serve the playing of any text, from the classic to modern repertoire.”
Andrea Haring
Associate Director, The Linklater Center
for Voice and Language
Columbia Graduate School of Theatre
Circle-in-the-Square Theatre School

“Pat’s ability to translate the complexities of Standard and Classical Speech into clear and simple practice, makes her an amazing resource for any student of voice and speech, both personally and a through her indispensable book, CLASSICALLY SPEAKING. I knew Pat was an amazing teacher when I was her student, but since becoming a speech teacher myself, I’ve realized the true extent of her mastery.”
Molly Goforth
Actress & Teacher

“I consider Patricia Fletcher ONE OF THE FOREMOST INSTRUCTORS IN THE FIELD. Through her character-driven speech and dialect work, Pat’s care and concern is always on the mantle of originality and creativity. I am enviable of today’s graduate students, and I welcome her daily to the classroom in appreciation for this very valuable new textbook for the 21st century actor.”
Robert Lupone
Director, New School for Drama
New School University
Artistic Director, MCC Theatre

“Patricia’s sensitivity to the sounds, rhythms, and musicality of American speech TUNES THE ACTOR’S EAR TO A WORLD OF DIALECTS, through the use of phonetics, a comprehensive CD, and an arsenal of quotes from Shakespeare, Chekhov, Ibsen, Strindberg, Shaw, Wilde, Congreve, Poe, Dickens, Melville, Lewis Carroll, and much much more…”
Christopher Martin
International Director/Actor
Founding Artistic Director, Classic Stage Company

“I think the book is really useful and the CD is fantastic! I will definitely use this book for my grads.”
Christine Adaire
Chicago College of Performing Arts/
Theatre Conservatory